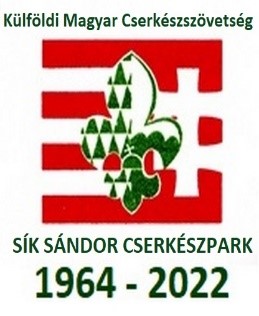 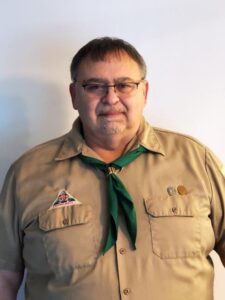 In 1974, after a year in an Italian refugee camp, 13-year-old George Kovacs finally arrived in the United States. In March of that same year, his life in scouting began when he joined the Bessenyei Gyorgy Scout Troop #22 in Cleveland, where he is still an active member. Soon, he made friends together with whom he still works and keeps in touch. In 1976, he completed the patrol leader’s course here in our park, then continued as an instructor within the same division.

In 1978, George finished the assistant scoutmaster’s program and became a scoutmaster in 2001. He continued to serve as scoutmaster in Cleveland, a position he still holds. While establishing his family, his three children grew up with the scouting spirit and continued involvement in troop camps, jamborees, and other scout venues his appreciation toward Alexander Sik Scout Park.

In 2011, Association President Imre Lendvai-Lintner approached George with a question, “Would you mind helping the camp director Zoltan Lamperth, as an assistant?” He answered jokingly, “Who is Zoltan?”

After considering this request, he accepted the challenge with conviction and worked with Zoltan for the next ten years as assistant director in developing and maintaining the park. George upscaled modifications throughout the camp, modernizing the water system, storage facilities, and other projects. He planned and managed the building of a new camp infirmary and renovated the old one. His greatest achievement was planning, building and furnishing a new central conference building clearly showed his long-term commitment to taking care of the Park’s future.

In 2021, after the retirement of Zoltan Lamperth, George took on the full directorship of the Alexander Sik Scout Park.
George comments, “…a lot of work is still ahead of us but I can say those scouts I came to know 48 years ago are still helping. Without them, this work would be very difficult to complete!” 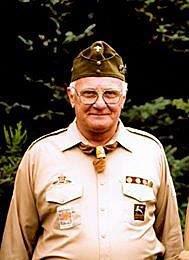 SCOUT PARK TODAY and TOMORROW
The Hungarian scout leadership soon recognized that uniform training is the most important part in developing good leaders. The training needed an adequate, well equipped campsight. In the early twenties they acquired the Harshegy scout park in the hills of Budapest where they developed standardized methods for leadership training in the scout movement.
Following the war Hungarian scouting was restarted in the DP ( displaced persons) camps. By the 1950’s many of the leaders and scouters were dispersed, migrating to 4 main continents. In the diaspora the leadership training remained.
After ten years of searching, in 1963, the Hungarian Scouts Association in Exteris located a suitable campsite for leader training. Four visionary leaders: Mr. G. Bodnar, Rev.dr. S.Gerencser, Rev. L. Kovari and dr. G..Nemethy purchased the property and set the centralized home for future Hungarian scouting. It was an outstanding act of conviction.
During the following sixty years the Alexander Sik Scout Park provided the home of tousands of leaders, boy and girl scouts.

Mr Zoltan Lamperth (honorary director) explained:
“ I first attended the Park, near Fillmore in the early 1970’s during the May obstacle race competitions and saw the scouts in action. It was a unique experience, including the evening campfires, the Sunday services in an open pine-forest cathedral all of which was imprinted in my mind. From that moment I became a loyal friend and full supporter of the camp!
The 167.6 acres camp located near Fillmore, Allegany County in Western New York State holds leadership training camps, scout camps, school camp, week-end and winter camps, jubilee camps and jamborees. Thank to those who volunteered over many years ensuring the campsites, roads and numerous buildings with all the infrastructure necessary! Although many of these individuals have passed on, the work continues to maintain the camp’s functionality… It is a beautiful place to be…!

This is clearly visible at the Alexander Sik Scout Park. 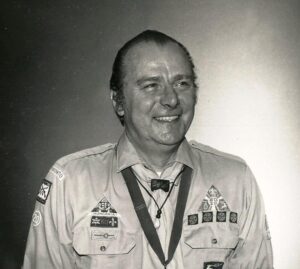 Mr. Louis Jambor received his solid scout foundation during his high school years. At the age of 16, (which is below the minimum age requirement) he became an assistant scoutmaster.
He attended the 1933 World Scout Jamboree at Godollo, Hungary. Like so many displaced persons after the war, he lived in refugee camps in Germany until he emigrated to Canada in 1953. His love for scouting never diminished and soon he accepted acting leadership of Arpad Scout Troop #20 in Toronto. He continued in this capacity for 20 years and then became district commissioner for the Southern Ontario area. Soon he advanced and became the Regional Commissioner for Region 5 (Canada).
Towards the end of the 1970s, Louis accepted his life’s greatest assignment, directing the Alexander Sik Scout Park. His talent, diligence, and hard work saw great achievements in the physical development of the park such as the first camp infirmary, dining shelter, girl’s and boy’s barracks, as well as an enlarged kitchen.
His life and achievements are like beacons for all, scouts and their leaders alike. A gentle, kindhearted man coupled with positivity and extensive scout knowledge will remain in the hearts and minds of all who knew him.
The late Executive Director of the Hungarian Scout Association, Mr. Gabor Bodnar remarked, “Follow Lajos’ example…he lived for the community. Disregarding his own interests, he was always ready to serve selflessly!” 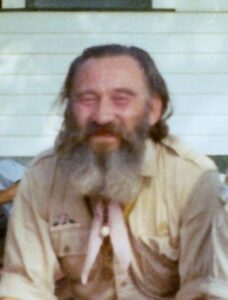 Rev. Louis Kovari’s scouting career started in the hills of Upper Hungary (now Slovakia) where he actively pursued Hungarian culture with very strong convictions. As a young scout leader, he completed the difficult HÖK leadership training camp at the Harshegy Scout Park in Budapest. Following this, he continued to be immersed and fully involved in scout-oriented programs in both Upper Hungary and Szeklerland in Romania.
The aftermath of the war saw him in Germany where his initiatives as an architect-builder failed. Depressed, he decided to enter monastic life and that is where the Rev. Dr. Stephen Gerencser reached him and impressed upon him to serve Hungarian believers. He continued his scouting in the internment camps until his superiors requested him to complete his novitiate.
In 1951, the winds of emigration took him overseas to the United States. He completed his seminary studies in Buffalo, New York, and was ordained there in 1954. His knowledge of architecture and building became a great asset while during his tenure teaching at Calisanctius Prep School. During his teaching, he actively searched for a suitable property for the Hungarian Scout Association where leaders could be trained. In 1963, he found the park known today as the Alexander Sik Scout Park. Once purchased, he became its first director. He built an assistant scoutmasters training building, the cub scouts building, the six-sided building called “Pentagon” and others. Rev. Kovari was a multi-talented scout leader who held the development of the park at his heart until 1981.
He lived a dedicated life to God, his homeland, and his fellow man.
Weather in the park Currently: